Backup or Transfer Your Starred Messages on WhatsApp

Part 1: What are starred messages and how important are they?

Part 3: Backup and view your WhatsApp starred messages at once with MobileTrans

Part 1: What are starred messages and how important are they?

WhatsApp has taken the world by storm and has become a major means of communication these days. With hundreds of contacts and innumerable messages on WhatsApp, going back to a few important ones is not only hassled and time-consuming but an arduous task.

Considering the issue, WhatsApp has a feature called starred messaged where you can save and bookmark important messages from an individual or a group chat. These messages have a star and when needed can be referred back without scrolling through the entire chat. The starred messages feature not only bookmark text messages but can also be used for marking photos, and videos.

WhatsApp nowadays is not only a platform for social communication but has become much more with sharing of important documents, images, and videos. Thus, with so much crucial data being shared over WhatsApp, the possibility of missing out on the important ones is quite high and especially when you need to refer them back. Here the importance and role of starred messages come in.

You can easily mark and star any desired message on your WhatsApp from your Android phone, iPhone, as well as WhatsApp for PC using the function. Once marked, these messages get stored in one place and can be then checked and referred to as needed. You can even backup your starred messages to further keep them safe.

The process of marking any particular message as a star is simple on your Android, iPhone, and PC with just a slight difference owing to the difference in interface. So now when the messages are starred you must be wondering where do they go and how to check them? Don’t worry, in the following part, we will guide you with the steps to check and view all the starred messages.

Step 1. Launch WhatsApp on your iOS device and click on the contact for which you wish to check the starred messages.

Step 3. A Contact Info page will now open where you need to tap on Starred Messages option that will show all the previously marked messages of the contact. 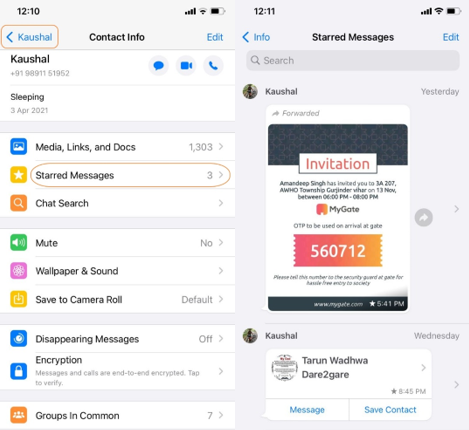 Note: The Starred Messages option under the Contact Info will show the number of messages that are marked like 1, 2, 3 … and so on. In case there are no marked messages, this section will display None.

Step 1. Open the WhatsApp application on your iOS device and then click on the settings icon at the bottom-right corner.

Step 2. A Settings page will open where click on the Starred Messages option. 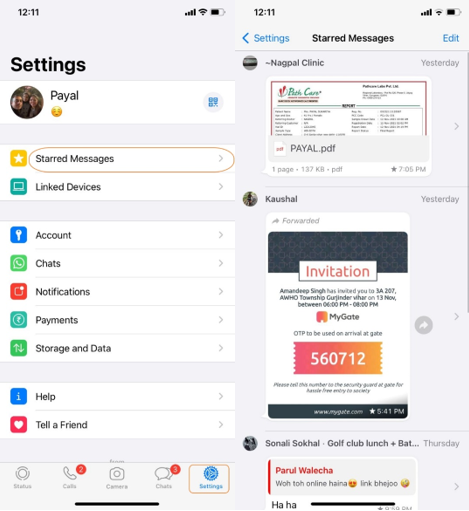 A new Starred Messages page will open showing all the marked messages along with the name of their contacts or group conversation.

On your Android devices, you can check all the marked and starred messages from one place.

Step 1. Open WhatsApp on your Android device and click on the three vertical dots at the top-right corner.

Step 2. A pop-up list of options will appear from where you need to tap on Starred messages. All the marked messages with their contact details and when they were marked will be shown. 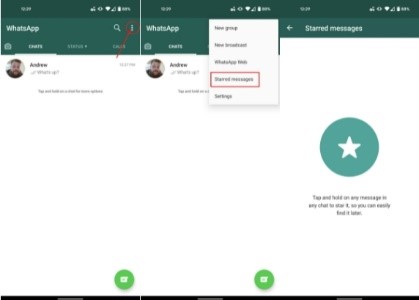 Part 3: Backup and view your WhatsApp starred messages at once with MobileTrans

Have you ever wondered what might happen if your smartphone gets stolen or your WhatsApp data is erased due to a bug, software crash, or any other issue? All your data will be lost including starred messages. Though WhatsApp has a chat backup option and you can even import WhatsApp backup, the storage capacity is limited and the backup will be of no use if the device is stolen.

Thus, to avoid such a situation and keep your important starred messages safe, the best way is to take a backup of your messages on your system. To ensure smooth and quick backup of WhatsApp on your system, using the right software is very important and here we recommend Wondershare Mobile Trans as the best choice.

Backup your starred messages via MobileTrans:

Wondershare has a collection of useful software in its kitty with MobileTrans being a popular one. This professional software is apt for all types of transfer, backup, as well as data restoring from your phone. Using the MobileTrans WhatsApp Transfer feature of the software, you can quickly and effortlessly backup all your WhatsApp chats including starred messages, videos, photos, attachments, and others to the computer.

Steps on how to back up your starred messages using MobileTrans

Download, install and run the Wondershare MobileTrans software on your system. On the main interface, you will see 3 options at the top: Phone to Phone, File Transfer, Backup&Restore. Click on the Backup & Restore tab. Choose the Backup app data option and a list of apps will open from which click on WhatsApp. 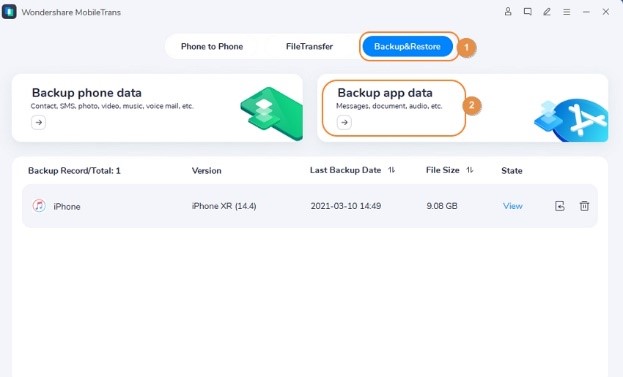 Step 2. Connect your phone to your PC

Next, connect your Android or iPhone to your PC using a USB cable. After the device is connected, the software will load Photos, Videos, Audio, and Others. 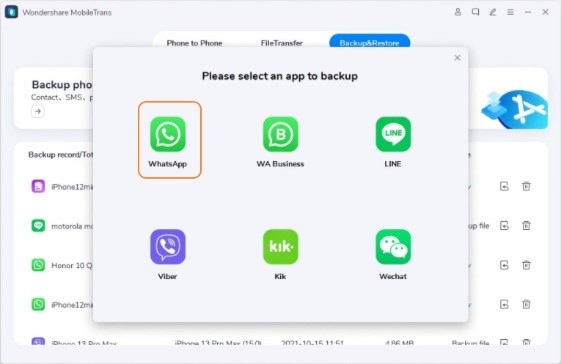 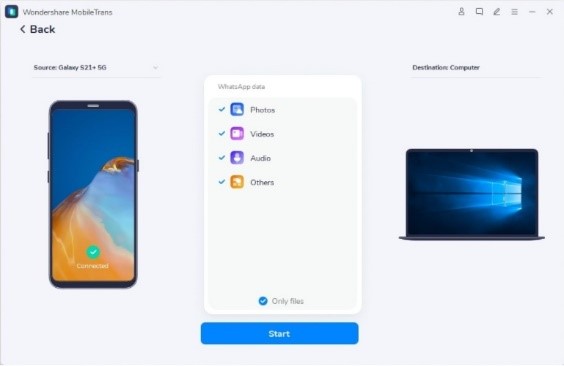 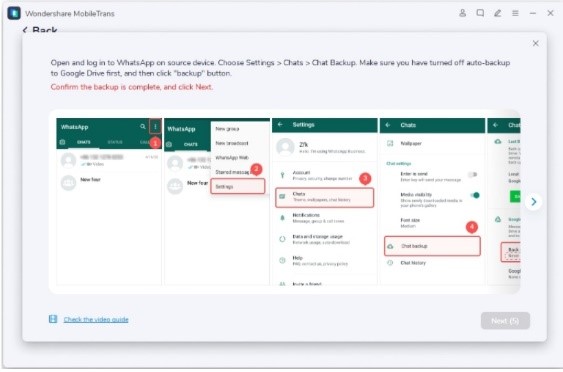 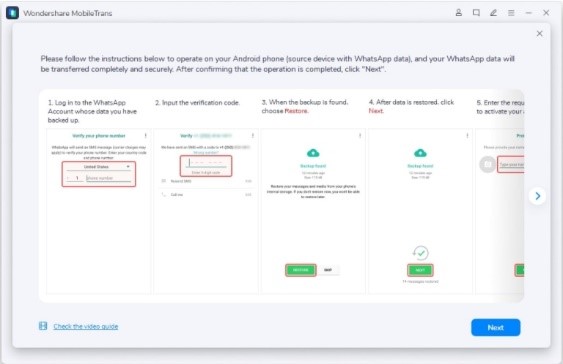 Follow the mentioned steps at the pop-up window to save the WhatsApp data on the local storage. You need to log in to your WhatsApp on the Android phone and from the device’s internal storage, you need to restore the data.

Ensure that your phone is connected throughout the backup process. The software will show the progress of the process and when completed, you will see the window as below with 100% backup completed including starred messages. 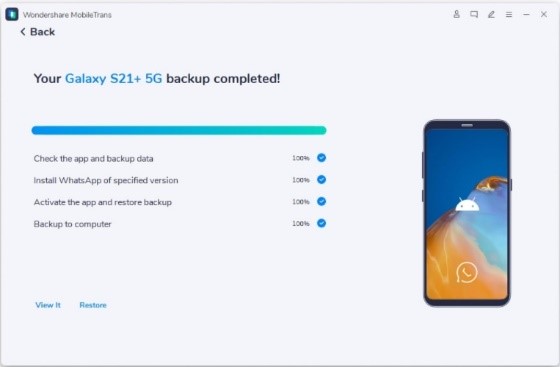 Once the backup is done and saved to your system, you can view the same.

So, backup your starred messages on WhatsApp using MobileTrans and prevent them from accidental loss. This hassle-free software also supports an array of other useful features like data transfer, restore, and others.

How to Migrate WhatsApp from Android to iPhone?

How to Export WhatsApp Chats from Android

How to Restore WhatsApp Backup from Google Drive to iPhone? 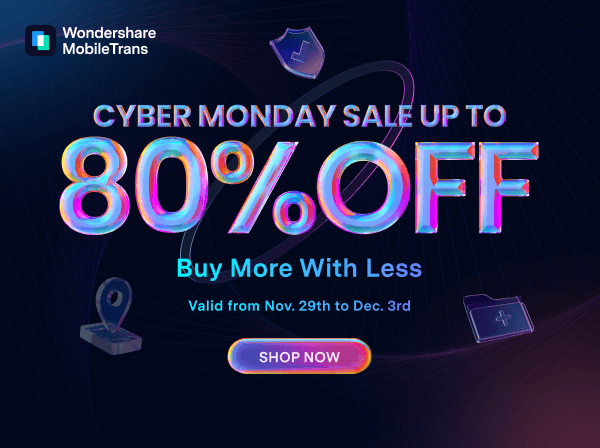