Easy way to recover WhatsApp messages deleted by the sender

"Imagine your phone gets a WhatsApp notification, and as soon as you open the app, the message gets deleted by the sender. Sounds frustrating? Indeed it is!!"

Part 1. Are you curious about what your friend has sent and then deleted on WhatsApp?

Part 2. Are WhatsApp messages deleted by the sender really missing?

Part 3. How to recover deleted WhatsApp messages with Wutsapper

Part 1. Are you curious about what your friend has sent and then deleted on WhatsApp?

A few days back, my best friend, Mark, sent me a photograph on WhatsApp at 1:00 am in the morning, but suddenly he deleted the message. When I woke up and checked my WhatsApp, I saw - This message was deleted in my friend's chat thread. Curiosity killed the cat; damn, I was getting furious to read those deleted WhatsApp messages and really felt helpless. 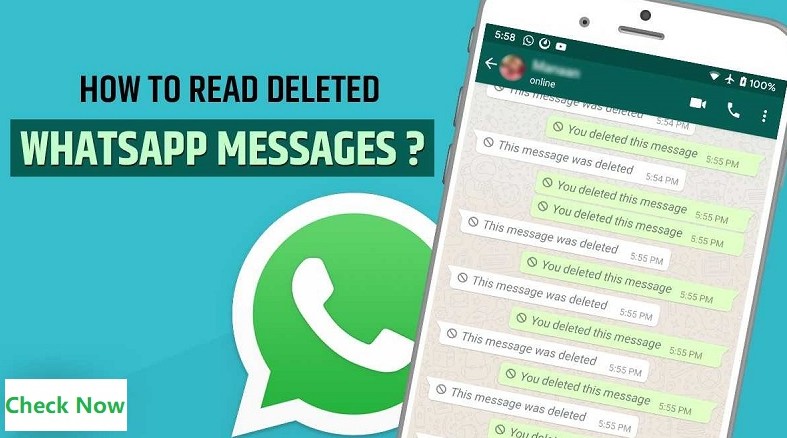 One day another friend told me about this, she said the sender ignored saying that there was nothing serious about the message and just accidentally sent her.

Keeping this into account, I have researched and come up with the best way to recover deleted WhatsApp messages in a matter of seconds. Read on and bring all your curiosity to an end in a couple of minutes.

Part 2. Are WhatsApp messages deleted by the sender really missing?

Before jumping into the sure-shot way to read deleted WhatsApp message someone sent you, let me tell you one drool-worthy fact that might leave you awestruck. People generally think that if they delete the message within the first seven minutes of sending it, then the message gets permanently deleted. However, the truth is far away from this "promising myth".

Although WhatsApp claimed earlier that when you delete the message within a few minutes of sending it, the same will get permanently erased from your device but is it true to the point?

A Brief to the Technical Principle

New research published by iOS expert Jonathan Zdziarski, says that the chat logs from WhatsApp continue to linger on even after you've deleted the messages. Forensic traces of chat linger are found by Zdziarski. He claimed that these traces could be accessed by someone with physical access to the device or by law enforcement issuing a warrant for backups.

Although WhatsApp has been appreciated for its security and end-to-end encryption since its inception, these encryptions are only applied when data is being transmitted, preventing carriers from intercepting your conversations. 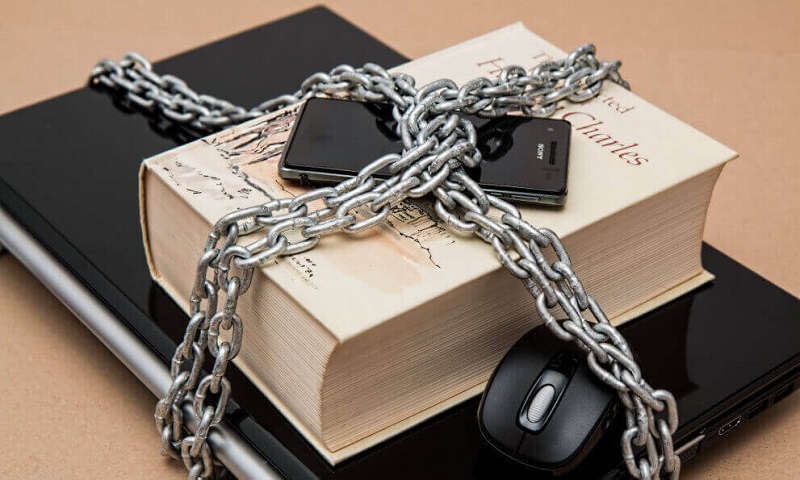 But the findings of Jonathan Zdziarski claims that cloud backups are not encrypted and the intermediaries can fetch clear records of conversations by physically accessing the device.

Reports also stated that although the data is deleted from the app, it is not overwritten in the SQLite Library, and therefore, remains on your device. His findings open up the fact that the app retains and stores the chat logs as a treasure trove for those who are mining for data.

Should you be worried?

Believe it or not, the moment I came to know that WhatsApp messages are not deleted permanently and can be accessed, I got panicked and started doubting the credibility of this application. But then, I realized that things aren't as frightening as I have imagined.

So, if after knowing that whatever you've deleted so far is still somewhere on WhatsApp, fret not unless you haven't transmitted any sensitive message. Thank God, I didn't!! Hope you are safe too.

Since the deleted WhatsApp messages are still there and you can read them by physically accessing the device, what if you don't have physical access to the sender's phone? Is it still possible to read them?

Well, here's good news for you!! You still can access those deleted messages right from your comfort zone. Wondering about how to recover deleted WhatsApp messages? There are plenty of third-party apps available over the web that help you read or recover the messages deleted by the sender.

All you have to do is install the rightmost app on your device and follow the on-screen prompts to get back all the deleted messages. In addition to the third-party apps, you can also recover those messages from local storage or file browser on your device. Easy, isn't it!!

Part 3. How to recover deleted WhatsApp messages with Wutsapper?

Wondering about how to recover deleted WhatsApp messages? Some third-party applications might help you in reading the deleted chats and WhatsApp media, making a simple choice a backbreaking task.

However, if you are looking for a sure-shot way to get the job done right, look no further and install Wutsapper right away on your device. This app is a one-stop destination to fetch all the deleted WhatsApp messages in no time.

It is a fast and easy approach to safely recovering your missing chats, videos, audio, and other media files.

Watch this video to save your time:

Or you can also read the using steps below.

Here's mentioned the step-by-step process to recover all your deleted WhatsApp messages using Wutsapper within a few clicks. 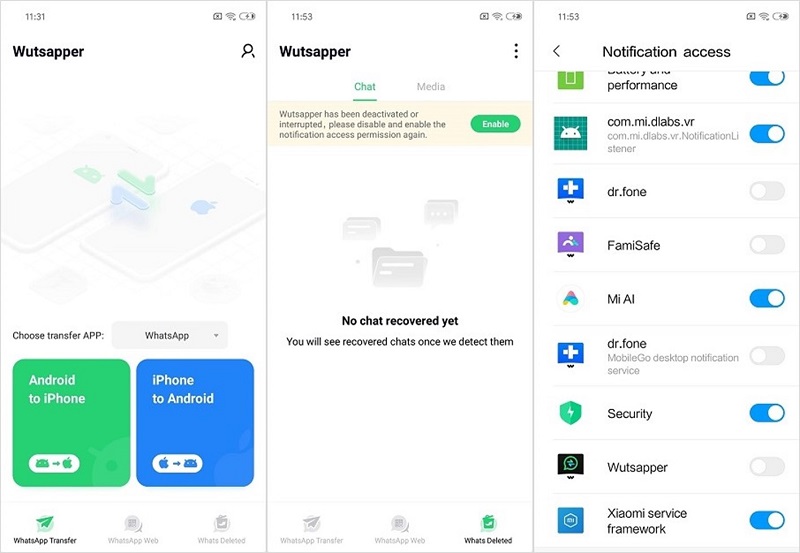 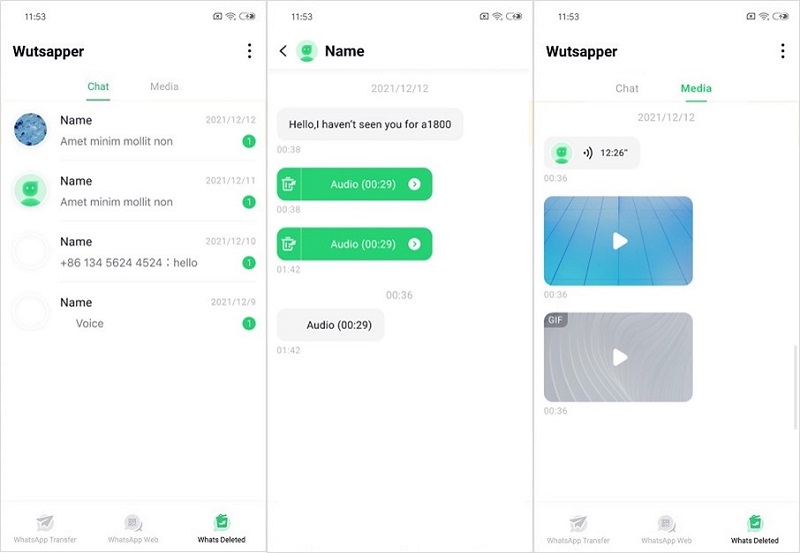 We know how annoying it is to feel helpless when someone deletes the message, making you unable to read. Therefore, we have conducted in-depth research and come up with the fact that you can easily access WhatsApp deleted messages by using local storage, cloud backup, or by using third-party apps. I am sure this article will help you get back all those deleted messages within little or no time.

Although cloud and local backups can recover the deleted messages, they don't guarantee anything. Both of them act as a hit and trial method that might or might not work. Hence, I personally suggest you go for Wondershare Wutsapper and get all your WhatsApp messages deleted by the sender back in a few clicks.

Moreover, what makes this application different from others is its compatibility. Wutsapper is compatible with a wide range of Android and iOS-based devices. So, look no further and download this feature-packed app right away to get utmost satisfaction by reading the deleted WhatsApp messages.

How to Recover Deleted WhatsApp Messages and Stickers

How to Make a Sticker on WhatsApp?

The Most Popular 10 WhatsApp Stickers You Should Use in 2023

What is WhatsApp Web? Tips and tricks you should know How to use WhatsApp on tablet and phone simultaneously? Easy way to recover WhatsApp messages deleted by the sender Delete for Everyone? Incredible WhatsApp feature you should know. Handy Tips to Spy on WhatsApp Messages [Hush! You Cannot Miss]