Part 4: Is It Possible to Use Both the Frequency Settings on the Same Router?

Part 5: How to Transfer Contacts from Samsung to Vivo via your SIM Card?

The Wi-Fi router in your house/office uses radio frequencies to transmit the Internet to different devices. In general, there are two most popular radio frequencies, i.e. 2.4 GHz and 5 GHz that are used while setting up a WLAN network. However, the majority of people don't know which radiofrequency will best suit their network requirements and usually end up choosing the wrong one. 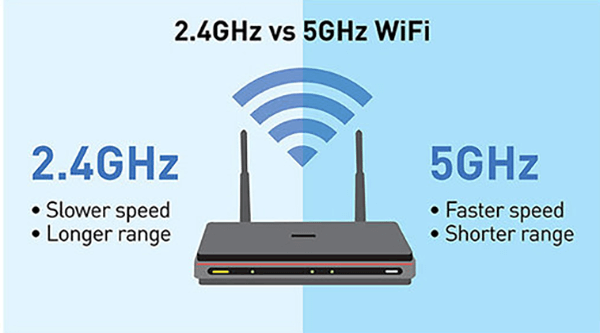 If you've been struggling to decide between 5G vs. 2G Wi-Fi, continue reading. In this article, we are going to share a detailed guide on the major differences between both these radio frequencies so that you can make the right decision while setting up a Wi-Fi network at your place.

2.4 GHz is the most common radio frequency that's used by the majority of electrical appliances. It's comparatively slower than a 5G Wi-Fi, but can be used to cover a large area. Basically, if you want to use the Wi-Fi in a wider area and have too many devices that utilize the 2.4GHz radio frequency, choosing the 2G band will be the right choice. It'll give you optimal speed and all your electronic devices could be connected to the Wi-Fi easily. The only downside of using the 2.4GHz band is that it is more vulnerable to interference, causing the Internet speed to get slower.

the 5GHz band, on the other hand, is comparatively faster and it can deliver a maximum speed of even 2 GB per second as well. However, a Wi-Fi router running on 5 GHz radiofrequency will only cover a smaller area. This means it'll be an ideal solution if you're planning to place your electronic devices near to the router and won't be moving them around either. The 5GHz band is also an ideal choice for users who are planning to perform intense activities online such as live streaming, videoconferencing, gaming, etc. Since you'll get fast Internet speed, you won't have to worry about unexpected network interruptions.

So, what are the major differences between 2G and 5G Wi-Fi? Let's walk you through a few points that'll help you differentiate both the radio frequencies from each other.

Since the 2.4 GHz band can cover a relatively larger area, it's a great choice for large buildings that have multiple electronic devices. They'll provide an optimal speed and all the devices will be able to connect to the Wi-Fi without any hassle.

However, if you're planning to set up WLAN in a smaller building with limited devices, it would be better to choose the 5 GHz frequency. This way you'll be able to enjoy fast Internet speed and perform all your online activities easily.

Since 2.4 GHz covers a large area and supports multiple devices at the same time, it's extremely prone to interference from other networks. Interference can also occur from other electronic devices such as microwave ovens, considering they use the same radio frequencies as well. So, if you are comfortable with unexpected interferences, you can choose the 2.4 GHz band for your network.

With a 5 GHz band, the interference is pretty low. So, if you choose 5 GHz, you'll be able to enjoy exceptional speeds without any interruptions. But, this also means that the Wi-Fi will be covering a smaller area only and all your electronic devices need to be jam packed within a smaller radius.

Both 2.4 GHz and 5 GHz bands use different waves to transmit the Internet. For instance, 2.4 GHz bands use longer waves and that's why they cover a large area. These waves can easily transmit through solid objects such as walls, doors, windows, etc, making it an ideal choice for a relatively large building.

5 GHz bands use shorter waves that can't transmit through solid objects. This is the reason why 5 GHz bands are suitable for smaller areas such as single rooms and offices. Also, since it uses shorter waves, it can be used to support devices that require higher bandwidth.

Another major difference between 2G and 5G Wi-Fi is congestion. Congestion happens when multiple devices try to connect to the same network and make it crowded. Due to congestion, a network becomes slower and one may not receive the desired Internet speed. Since 2.4 GHz bands cater to a large number of devices, they are more vulnerable to congestion. When too many devices will try to connect to the Wi-Fi, it'll automatically crowd the network, and that's why you'll experience slower speed.

Fortunately, that's not the case with a 5 GHz band. Having shorter waves and supporting a limited number of devices, a 5 GHz network is less likely to get crowded. This makes 5G Wi-Fi more stable than the traditional 2.4 GHz bands.

When it comes to choosing between the 2.4 GHz and 5 GHz band, the cost is going to be one of the major deciding factors for everyone. Being a relatively new technology, the installation of a 5 GHz band for your WLAN network is more expensive than the regular 2.4 GHz band. So, if you are willing to spend money on the installation and need fast Internet speed, you can go ahead and choose the 5 GHz band for your network.

So, as far as speed is concerned, choosing the right radio frequency will mainly depend on your network requirements.

Part 4: Is It Possible to Use Both the Frequency Settings on the Same Router? 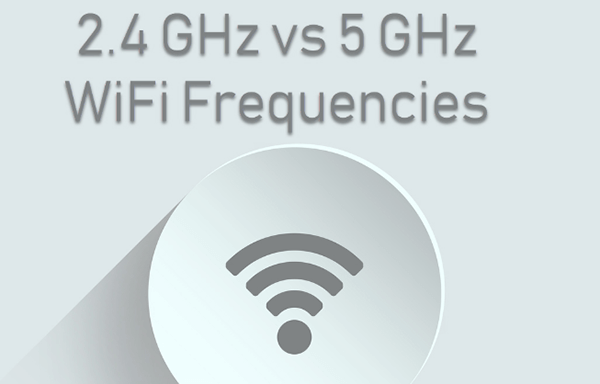 Since both the radio frequencies cater to different network requirements, many people also want to know if it's possible to set up 2.4 GHz and 5 GHz frequencies concurrently. Fortunately, the answer is Yes! Today, you can buy dual-band routers that'll let you transmit both the frequencies simultaneously.

After setting up such routers, you'll see two different SSIDs (with the same identical name) on your devices. The only difference between these two networks will be that they transmit the Internet using different frequencies. This means you'll be able to choose the right frequency as per current network requirements.

For instance, if you are sitting in the same room as the Wi-Fi router, you can choose 5 GHz frequency and enjoy fast & uninterrupted Internet speed. However, if you are in a different room of the building, you can easily switch to the 2.4 GHz radio frequency and surf the Internet at an optimal speed.

Note: Some of the modern Wi-Fi routers even have the functionality of switching between 2.4 GHz and 5 GHz automatically, making it easier for the user to get the most optimal speed according to the current environment.

Now that you know the major differences between 2G and 5G radio frequencies and their features, let's address one of the most commonly asked questions about them, i.e., are 2G and 5G Wi-Fi harmful. The answer is No; both these radio frequencies are completely safe for humans.

Even though many platforms on the Internet scare people with the term “harmful radiations” from Wi-Fi networks, using 2.4 GHz or 5 GHz radio frequencies doesn't have any bad consequences whatsoever. Both these bands transmit frequencies at an extremely low rate and don't harm humans at all. In fact their frequency is way below the visible light.

So, if you've been scared of installing Wi-Fi routers at your place due to their harmful effects, don't panic at all. If anything, both these radio frequencies are completely safe and will help you enjoy high-speed Internet connection.

So, that concludes our guide on the differences between 2G and 5G Wi-Fi networks. When it comes to choosing the right radio frequency for your Wi-Fi setup, you'll have to first analyze your network requirements and then make the right decision accordingly. However, if you want to enjoy both these frequencies, you can also opt for dual-band Wi-Fi routers. They'll help you switch between the two radio frequencies according to the situation and you'll be able to enjoy uninterrupted Internet connection.