Samsung unveiled the highly anticipated Galaxy S22 series earlier this month at its first unpacked showcase of the year. The Galaxy S22, Galaxy S22 Plus, and Galaxy S22 Ultra are the three models in the new flagship smartphone series. All three phones have significant upgrades over their predecessors, including Qualcomm and Samsung's latest chipsets, sharper screens, excellent camera gear, etc.

If you're new to Samsung phones and have just purchased one of the new Galaxy S22 series handsets, there's something you should know. It's not as simple as pressing and holding the power button to turn off most of Samsung's new phones. You've come to the right site if you're unsure how to turn off Samsung S22.

What You Should Know

Because you can't turn off your Galaxy S22 series smartphone by merely pressing and holding the power button, Samsung provides four other options. Three of these ways do not need any modifications to the settings, so let's start with those.

Method 1: Turn off or Restart Your Galaxy Phone Using the Power Buttons

Method 2: Turn off or Restart Your Galaxy Phone Using the Side key and volume down button

Method 3: Turn off or Restart Your Galaxy Phone Using the Notification Panel

Method 4: Turn off or Restart Your Galaxy Phone Using the Quick Settings Menu

Method 1: Turn off or Restart Your Galaxy Phone Using the Power Buttons

People who don't like using the power and volume buttons together may switch off or restart their Galaxy phones with only one button, but it takes a little fiddling. To prevent the side key from launching Bixby when long-pressed, you'll need to remap it. This is how to restart Samsung phone: 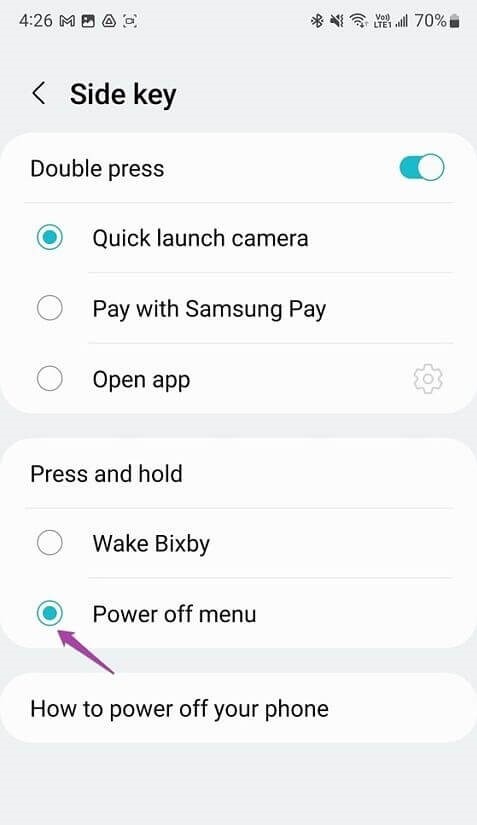 Method 2: Turn off or Restart Your Galaxy Phone Using the Side key and volume down button

To capture a screenshot on most Android smartphones, press the power and volume down buttons simultaneously, and the Galaxy S22 is no exception. But did you know that the identical button combination may also be used to access the power menu? The only difference between the two shortcuts is how long you keep the buttons pressed. The issue of how to turn off Samsung S21 is solved.

Method 3: Turn off or Restart Your Galaxy Phone Using the Notification Panel

Although the power button performs admirably, some users may prefer software activities. Fortunately, Samsung has offered various options for Samsung phone won't turn on. The quickest one may be on the notification panel to reset the Samsung phone. 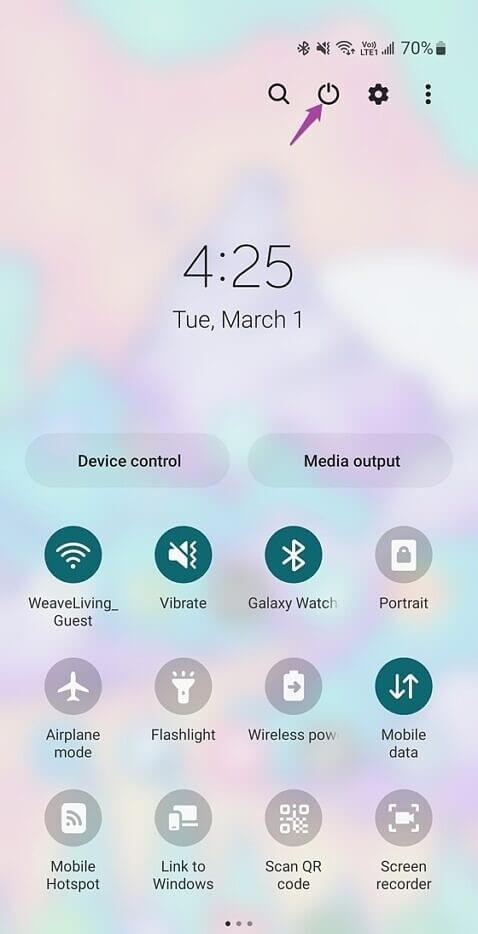 Method 4: Turn off or Restart Your Galaxy Phone Using the Quick Settings Menu

Method 5: Bixby may be used to turn off your Galaxy phone

Even if you don't find Samsung's built-in voice assistant, Bixby, helpful, you can use it to power down and restart your Galaxy. Bixby is activated by default when you press and hold the power button on a Galaxy S22 series handset. You may take advantage of this by asking Bixby to turn off or reset your phone for you.

As mentioned before, pressing and holding the power button on a Galaxy S22 series device triggers Bixby by dereliction. And you can use this to your help by asking Bixby to switch off or reboot your phone for you. Simply detector Bixby and say “Switch off” or “Turn off my phone.”

Yes. Switch to any option without 5G by going to Settings > Connections > Mobile networks > Network mode. You should choose LTE/3G/2G if possible (auto connect). Except for 5G, this choice has the most network compatibility. The primary reason for turning off 5G is to conserve battery life. 5G data is known to drain batteries, yet many people don't reside in 5G zones, to begin with.

MobileTrans - Phone Transfer is a simple but handy utility for transferring contacts, text messages, call logs, calendars, photographs, music, video, and apps between Samsung, iPhone, and other Android devices. Because Wondershare MobileTrans is compatible with Android, iOS & HarmonyOS systems, you may copy your data from Android to iOS.

Wondershare Phone to Phone Transfer, Back Up Your Phone, Erase Your Old Phone, and Restore from Backups are the four choices available on MobileTrans's primary user interface. You have to desire the option you want and follow the on-screen instructions. The application's straightforward UI makes it easy to see if your phones are linked, and it then leads you through any actions you would want to do.

How to restart Samsung S21? Are you having trouble turning off your Samsung phone? This is for a variety of reasons. For starters, it may be a simple and effective technique to minimize smartphone distractions when watching movies, attending meetings, or attending other activities. It's also the first troubleshooting option you should use if you're having problems with your phone. It appears to solve most difficulties miraculously. Whatever your cause, these were the several methods for turning off or restarting your Samsung phone. I hope it will be of usefulness to you. If you ever need to transfer your data to a new Samsung, you may use MobileTrans - Phone Transfer, as this is the best option for you.

[Answered!] Can You Nearby Share From Android to iPhone?

How to Sync Google Contacts with iCloud

How to Fix The Incorrect Time On Samsung Galaxy S22 or Other Android Phones?

10 Verified Tips to Fix OneDrive Not Syncing Everything about OneDrive You Should Know Easiest Ways To Take A Screenshot On Samsung Galaxy S22 And Other Android Phones Fix: Samsung Phone Apps Crashing How to Fix Samsung S22/S21 Overheating?