The impact 5G has also made to the global growth than previous network generations. Perhaps you are wondering where 5G can be used. The major areas where 5G is applicable include enhanced mobile broadband. This is where smartphones are involved in making new immersive experiences such as low latency, low cost per bit and more uniform data rates. The 5g capabilities are beyond enabling mobile connectivity. Good examples include mission-controlled communications and various applications in massive IoT to provide connectivity solutions on many scales. 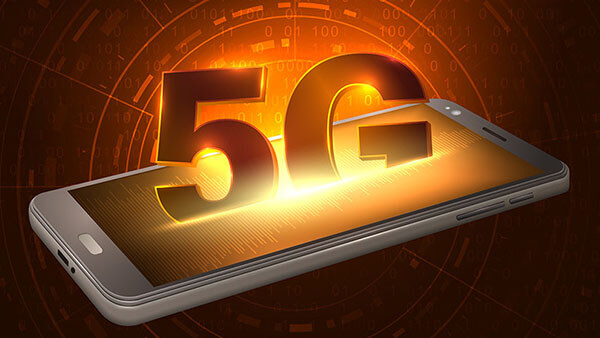 5G networks have launched in various regions around the world. The providers are currently offering connectivity technology in the UK, US and Australia, among other countries across the globe. However, there are rollout schedules to extend the 5G coverage to new cities and towns in the rest of the countries. We have many carriers offering the 5G connectivity in the US but within limited cities and towns. Although every carrier is expanding its offering each month to ensure millions of users access the network. The US's top providers include Sprint, Verizon, T-Mobile, and AT&T. this blog will focus on 5G on Sprint. Read on to learn everything about Sprint 5G.

Sprint 5G is a carrier offering mobile connectivity across various states in the U.S. The network is supported by a number of devices, especially smartphones. However, Sprint is currently part of T-Mobile now. The merge happened in April 2020, forming the most competitive provider in the United States. New customers will no longer be registered with the carrier but referred to T-Mobile. Before merging, the company had an impressive offering 5G rollout to millions of subscribers. 54 million smartphone users had already subscribed with Sprint. Sprint went live in the following cities; 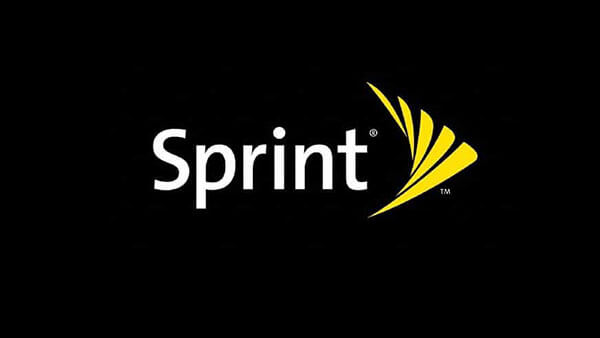 Sprint has thrived in its excellent performance and network reliability in the US, beating the rivals, especially in the video performance. However, the consumer reports rank the sprint 5G network as fair for data category and low for a reception (the unappealing scores lead to merging with the T-Mobile creating the most reliable network in the US). So, how fast is the Sprint 5G network?

When you compare Sprint 5G with other US carriers like Verizon, you will realize they all started with different paths. The Sprint 5G took a traditional way than the rivals whereby its signal reaches a broader section without facing the uncertainty that Verizon underwent in its early stages. The Sprint connectivity was consistent in its coverage and could not just keep popping up while you are using data, something that was common with Verizon 5G phones. 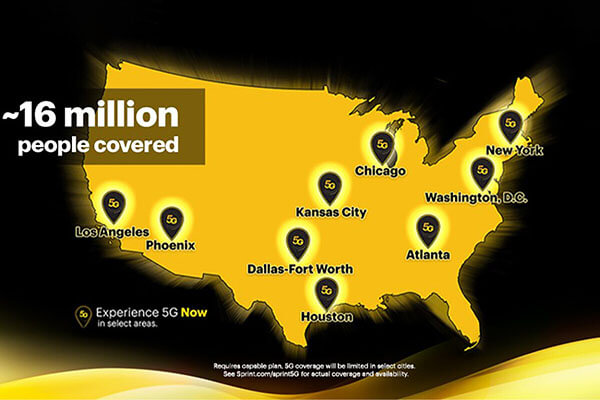 Before Sprint 5G was terminated to merge with T-Mobile, it covered a broader area in the US, delivering a relatively fair network speed than T-Mobile. The carrier launched its first true network in May 2019. During the launching period, Sprint 5G employed the underlying technology, the mid-band spectrum. Since then, it has been able to deliver significant 5G connectivity across the US. While the Sprint 5g rivals use a complicated mmWave technology to achieve their incredible speed, users only get the coverage when they are in near proximity to the 5G node. Something that Sprints strongly contrasts and describes as a hotspot 5G network.

Sprint 5G started its 5G network in four cities in the US. These included Kansas City - its home market, Atlanta, the metropolitan area of Dallas-FORT Worth, and Houston. When you are around these cities, you are not limited to the network coverage while you are moving; you don't have to stand in proximity to get the 5G coverage. 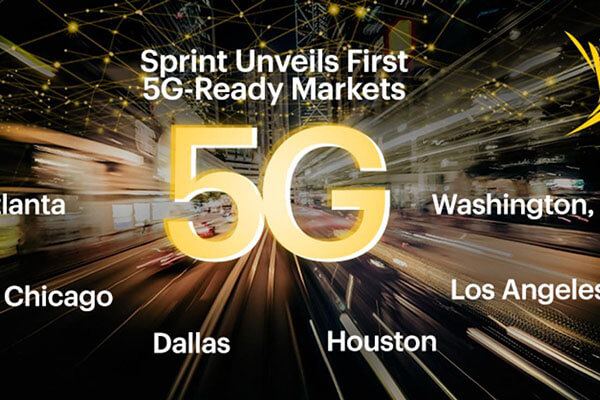 While the Sprint 5G expected to launch their network to other big cities, the carrier began to get a few 5G phones on offer to their subscribers. The network speed was averagely 203.8 Mbps, which was very fast than the average LTE download speed of about 35.2Mpbs.

Where exactly will you get the Sprint 5G coverage in the US? While we look into different regions with network coverage, Sprint made changes regularly to expand the 5G connectivity. The following is a precise summary of the sprint 5G coverage map.

Sprint 5G launched a few smartphones you can purchase to take advantage of the network boost. Subscribers are not limited to the Sprint 5G phones, but they can use other manufacturers' handsets to enjoy the network technology. The smartphones available from Sprint include the Samsung Galaxy s10 G, LG V50, ThinQ 5G and the OnePlus 7 Pro 5G. Check out the breakdown of the Sprint 5G's lineup of phones. 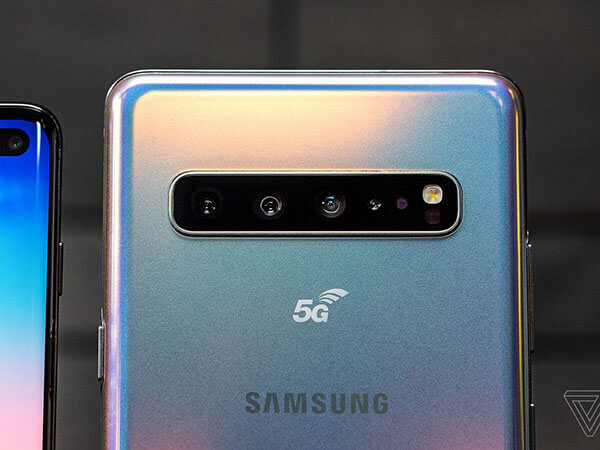 The Galaxy s10 is one of the groundbreaking smartphones offered at Sprint. The handset comes with an incredible feature set geared towards delivering high performance and excellent connectivity. The S10 comes with a battery capacity of 4500mAh, an on-screen fingerprint scanner, 8GB/256 GB. The screen size is broad enough with 6.7 inches display. The camera setup supports professional-grade video recording and 4k streaming. 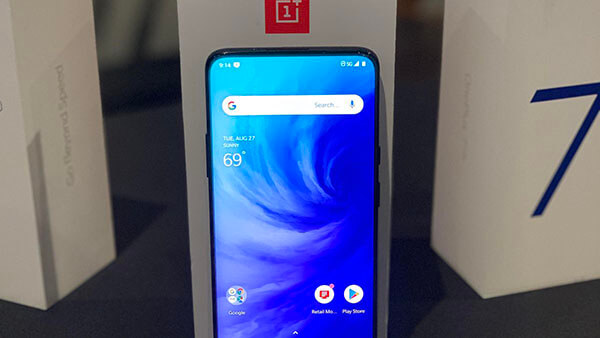 OnePlus is one of the flagship phones offered at Sprint at a very affordable price. If you are looking to spend less than $1000, this phone is your winning option. The camera setup is appealing as it comes with a triple-lens system that can capture high-quality photos with the huge 48MP camera. The front camera captures clear shots with the 16MP camera. The phone features a 6.67 inches AMOLED display with a refresh rate of 90Hz. It also runs on a powerful processor called Snapdragon 855, 8 GBGB of RAM and 256GB internal storage. The other cutting-edge specs integrated into the OnePlus 7 5G include Night Mode, Fast charging, Fingerprint sensor and a long standby time. The battery capacity of 4000mAh can sustain high performance on 5G for long hours. 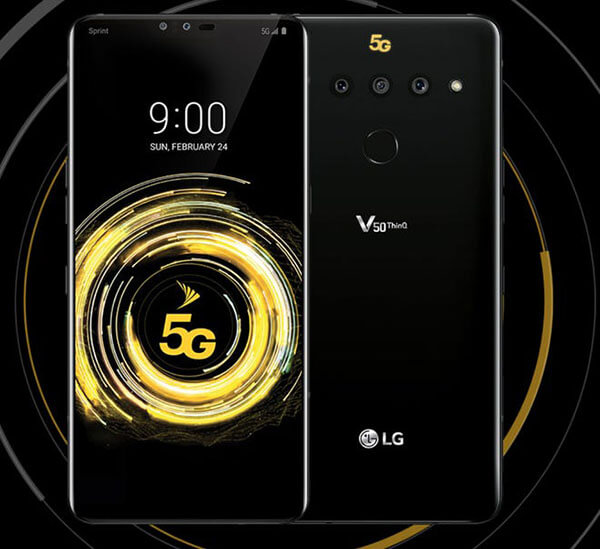 The LG V50 ThinQ 5G was originally Sprint's first phone that supports the 5G network. It is the cheapest phone offered by Sprint, yet it demonstrates excellent performance. The phone's general design is worth a look. The 6.4-inch QHD+ OLED display gives the best experience for video streaming and gaming. The phone comes with triple rear cameras and dual front cameras. The V50 ThinQ runs on a powerful processor, Snapdragon 855, 6GB RAM and 128GB internal storage. The battery capacity is 4000mAh to keep the phone powered for a long time.

Part 5: What are Sprint 5G plan and cost?

After purchasing a Sprint smartphone, or perhaps you have a different brand that is compatible with the sprint 5G, you will be required to pick the most appropriate sprint plan to help take advantage of their next-generation network. Ensure you are aware of the costs and offers that might favor your needs and budget to get the best Sprint 5G experiences.

Sprint offers incredible plans for subscribers. From the 4 phone plans offered to Sprint, only the highest tiers can connect to the 5G wireless networks. You need to have either the unlimited Plus or Unlimited premium phone plans to access the 5G service. You can always plan on upgrading to these options to enjoy sprints 5G network.

The following are the plans available on Sprint 5G;

Besides Sprint 5G being a significant carrier in the US, it has now merged with T - Mobile becoming a massive network. Following this merge, the network capacity increased across different cities and towns in the U.S. The merger means that the website will redirect new customers to the T - Mobile 5G. However, a vast improvement has been noticed, increasing competition among rival carriers like Verizon across the U.S wireless network industry.

Will 4G Phones Work on 5G Network？ What is the Difference Between 4G and 5G Introduction about Previous Generations of Mobile Networks The Latest Xiaomi 5G Phones List- Don't Miss! The Latest Huawei 5G Phones Lists How to Check if My Phone Support 5G?