Most people choose WhatsApp for its strict privacy, reinforced by the encryption of all data sent and received on the platform. In upcoming updates, WhatsApp has announced a new feature that will take privacy to a whole new level. This new feature is known as WhatsApp Disappearing mode and it will be available on the next feature update for both WhatsApp for Android and WhatsApp for iOS.

Disappearing messages is a feature that can be turned on or off at will for individual chats. For group chats, only admins have the power to turn on this feature. When turned on, all your WhatsApp chars will disappear at once.

To disable the feature, follow the same procedure described above and then select “Off” at the end. 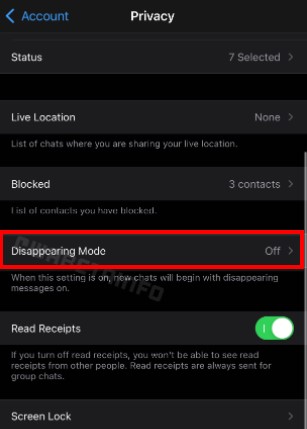 Once it is enabled, all new chats will start with “Disappearing Messages” already enabled. This feature will be available with the next WhatsApp feature update and is aimed at improving privacy controls.

Ways to Use WhatsApp Without Phone Number

How to Set Up WhatsApp Payment_Everything you Need to Know