A Beginner's Guide to take Screenshots on iPhone and iPad

Taking screenshots is very common these days. People like to keep the picture of their phone screen in their phone gallery, which they need later to get ideas or for sharing purposes. If you are also the one from them and have an iPhone in hand and want to know how to screenshot on an iPhone, keep reading this article. There are many ways to screenshot on iPhone.

The screenshot is an in-built feature in iPhone and iPad. You can save the picture of an item without downloading files. Screenshot on the Apple iPhone is more accessible than downloading a file.

Part 2: How to Set your Apple Device Up?

Part 3: How to convert screenshots formats?

Before learning to take a screenshot of your display screen, you have to know about the buttons of your iPhone. There are four main buttons on the iPhone side, home, volume, and top button. They all are for a different purpose, but they can also be used as shortcuts.

Before learning to take a screenshot of your display screen, you have to know about the buttons of your iPhone. There are four main buttons on the iPhone side, home, volume, and top button. They all are for a different purpose, but they can also be used as shortcuts.

There are two different types of iPhones, the one with a home button and the other without a home button. The home button is a circular button on iPhone, which you can see in the image.

Taking a screenshot with the help of buttons is an easy way; you can take pictures of the iPhone screen using the home button. You have to press the power and home button simultaneously. Suppose you're operating a sensibly latest version of iOS. You'll see a tiny thumbnail of the screenshot show up at the bottom-left corner of the phone.

You'll tap this if you want to edit or share. You can wait or can swipe it to make it disappear. But don't worry if the thumbnail doesn't appear or disappear before you open it. You can find the picture in the gallery on your phone.

You can also take the screenshot without the home button, for which you need to press the power and the volume up button at the same time. The remaining procedure of editing and sharing will be the same. This method will help you know how you can capture screenshots on iPhone 13.

or disappear before you open it. You can find the picture in the gallery on your phone.

Method 3: Taking a screenshot on an iPad without a home button

You can quickly learn how to screenshot on an iPad without a home button. All you have to do is simultaneously press the top and the volume button. As soon as you press the buttons, release them quickly. You can edit or share the screenshot with the help of the thumbnail, which appears temporarily on the screen.

What If the Home Button Doesn't Work?

It is still possible to take a picture of the iPhone screen without the power or home button. You can activate the "software button" from the setting of your iPhone. All you have to do is tap on the phone setting> General> Accessibility setting icon. 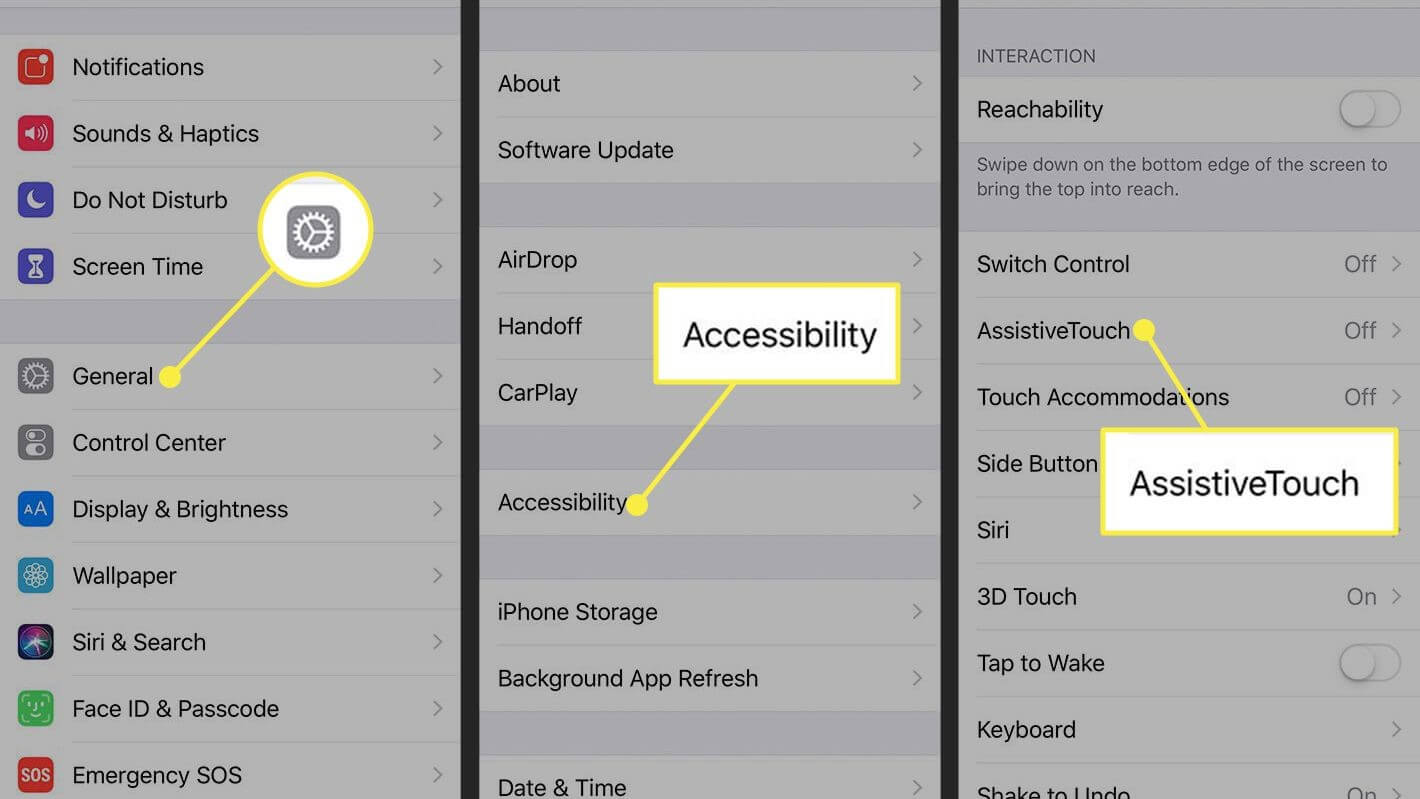 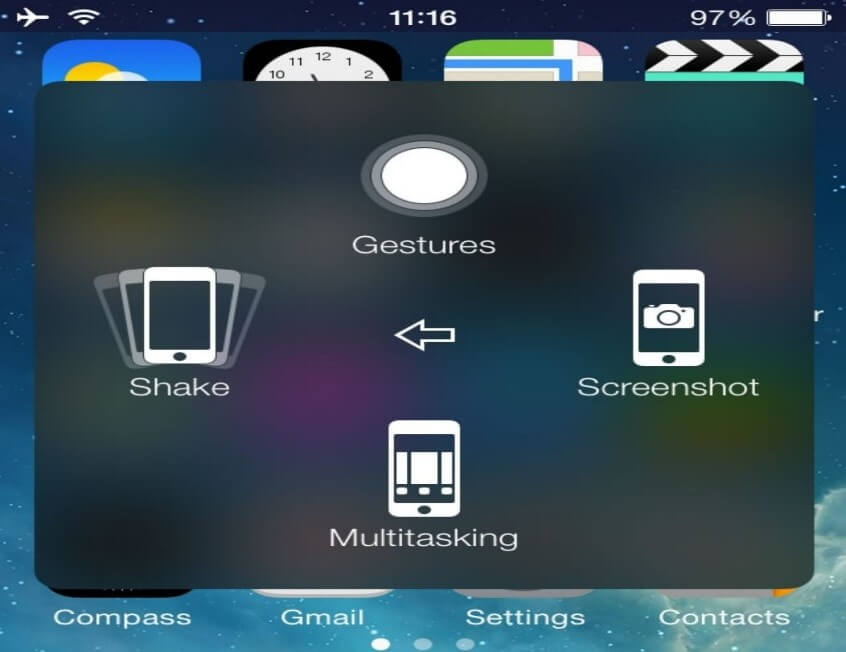 You can quickly move the assistive touch icon if you feel it covers your content by tapping and holding the button and moving to the side where you want. But you cannot make it disappear unless you turn the option off. This option is available on iPhone as well as on iPad. With the help of these assistive gestures, you can create iPhone screenshot shortcuts.

Silently Taking a Screenshot: Taking a screenshot in a crowded area is very embarrassing sometimes. People might think you are capturing their photo, which will be very uncomfortable. It would help to take screenshots silently by turning on the mute option with the help of the volume button to avoid this situation.

You can use Web Capture. It is free and can use to capture the screen of a website. Open the app. It is a browser-like app, and there is no toolbar or status. You don't need to edit or crop the picture. The picture will save in the gallery of your phone. This is the auto screen capturing app, and it helps people take shots without any editing.

An unknown iPhone way has been making clients insane – after finding that they can screenshot by only tapping the back of their apple phone. Usually, the users can take a screenshot by pressing the volume up and side buttons.

However, an update in the IOS14 software enables the users to screenshot only by tapping on the back apple logo of their apple devices. These features can utilize for an assortment of diverse activities.

Part 2: How to Set your Apple Device Up:

To learn how to change screenshot settings on iPhone 12 or iPad, you have to follow the steps given below:

You can choose the double-tap or triple-tap option. You can select the tapping method in this setting option to tap double or triple to take a screenshot.

After the complete setup of your device, go to the menu option and make sure to save changes, then exit this menu option. Now, tap on the apple logo at the backside of your apple gadget IOS 14 update will help you capture your screen. Then you can quickly go to the gallery option and view your screenshots.

Part 3: How to convert screenshots formats?

The screenshots in some of the updates of IOS software will save your screenshots in the .png form, while in some versions, it will capture the shots in .jpg format. This part is a bit critical, but it will not affect your files most of the time. However, if you take a screenshot in the .png form, you want to forward it to someone in the .jpg file. Then, in this case, you have to convert it into your desired format by iPhone screenshot settings.

Select your screenshot in the gallery and press the image> export option. Then click the format option in your menu and select JPEG and save. Now you can easily forward your .jpg file to anyone.

Now with this article guide, you perfectly know how to take screenshots. Some questions that our clients usually ask are given below:

1. Where were my screenshots saved?

2. The thumbnail will stay on my iPhone or iPad screen for how much time?

The thumbnail will pop up on your gadget screen when you capture a screenshot. You can slide the thumbnail away to ignore it or tap on it for further Photo Editing or forwarding. The thumbnail will disappear spontaneously in 5 to 6 seconds if you do nothing.

3. Will my screenshot record everything that appears on my screen at that time?

4. Do the captured screenshots show the Face Id mark?

No, the face ID mark doesn't appear in any screenshot captured by the iPhones. The same adjoining screen colors cover the scoring zone in a method that everything on the screen looks like there is no notch or mark on it, and it seems faultless.

5. What will be the screenshot size in iPhone or iPad?

The screenshots in the iPhone size depend on what you are trying to capture, the resolution of your image, and many other factors. For instance, the screenshot size of the iPhone 12 screen full of apple apps with the IOS15 is almost 4MB. The simple screenshots are generally in kbps, while the IOS screenshots vary with the factors.

There are many ways to capture screenshots on iPhone or iPad like with home button, without home button, volume and side buttons, assistive gestures, and late but not least, the back tapping method. You can also learn How to take screenshots on a Samsung Galaxy S22 and other android phones by Mobiletrans.

What To Do with Old iPhone After Transfer?

What To Do Before Getting a New iPhone?

Quick Start Not Working? - 4 Ways to Fix It Now!